few minutes ago a new video titled How To Level Up FAST In Ingress! (2019) | BEST Way To Reach Level 10 For Pokemon GO Players! (Pt. 2) was uploaded in the channel: LuckyBunz 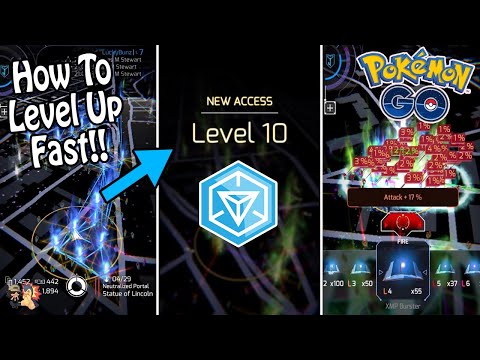 As published in the video description by LuckyBunz: How To Level Up Fast In Ingress! (2019) Best Way To Reach Level 10 In Ingress Prime For Pokémon GO Players! ★ Welcome back to part 2 of my How To Play Ingress For Pokemon GO Players Series! This video will be going over all of the relevant items you need to familiarize yourself with in order to utilize some of the best methods to farm AP in game!

Getting to Level 10 in Ingress can be rather time consuming depending on the portal density in your area, but this video covers a variety of methods you can use in order to get yourself there as soon as possible! If you have any questions at all about anything that was covered in the video, please feel free to leave a comment below and I will do my best to answer it! 🙂

How To Play Ingress For Pokémon GO Players Playlist!

Very recently, Niantic announced that Ingress Prime players would be getting Portal/PokeStop submissions in certain countries if they were Level 10. Previously, only Scanner Redacted, which was the original Ingress, gave players the ability to submit portals. The main reason this was an issue is because new players could not use Scanner Redacted, they would have to play off of Ingress Prime instead.So for a long time, newer players who had reached Level 10, were unable to submit new portals.

Right now, Australia, Brazil, New Zealand, and South Korea are the only countries that have the ability to submit portal nominations/submissions in game as Level 10 Prime players. Niantic has stated that once this feature is running smoothly, it will be rolled out globally. Fingers crossed it is sooner rather than later though!

With that being said though, that is why I really wanted to make this series in order to help all of you Pokemon GO players get to Level 10 as fast as possible. That way when they do roll it out globally, you can jump straight into submitting portals to create new PokeStops and Gyms in your local area!

I was grateful enough to partner with one of our best local Ingress players, Michael, to help make this series! He is truly one of the best people to explain this game to Pokemon GO players, and has been nothing but helpful mentoring everyone in our local community.

It may be a very long time before PokeStop submissions rollout globally for Pokemon GO players and so leveling up in Ingress is definitely the next best thing! We have been able to create over 100 new PokeStops, and 40 gyms in our town in the past few months thanks to Pokemon GO players who started playing Ingress!

And while these players did originally start Ingress before the Prime rollout happened, it has really helped improve the quality of life for Pokemon GO in our community nonetheless. Pretty soon, the newer players in Prime will be able to do the same thing, and that is why it is so important to get a head start now!

Stay tuned for Part 2.5 & 3, which will be going over the best medals to focus on when grinding from Level 8 – 10 as a Pokemon GO player! I will do my best to get it out asap! 🙂

We will keep following the news and posting everything we find