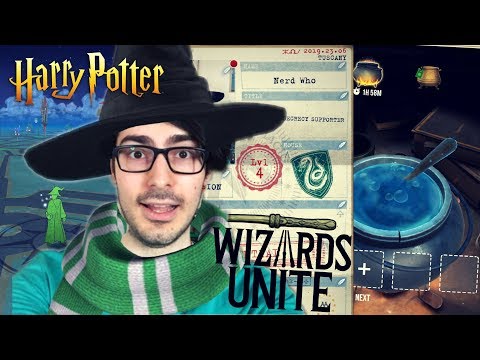 This is the 1st part of my Harry Potter Wizards Unite 2019 Gameplay/Walkthrough as a Slytherin, in which I collect my first Foundables/Confoundables and add them to the Registry, create my Ministry ID, visit a few Greenhouses and Inns to get Spell Energy, gather some Potions and Portkeys, and adventure aroud helping the Ministry of Magic the best way I can. In this video I also share my impressions/review on the Wizards Unite app as a long time Potterhead and Pokémon Go fan.

Are you enjoying #WizardsUnite game so far? Which House and Profession did you choose? Write your Friend Codes in the comments so I can add you and we can save the Wizarding World together!

Give this video a thumbs up if you want to see more #HPWU Wizards Unite Slytherin iOS Gameplays/Let’s Plays, and don’t forget to subscribe to my channel for more #HarryPotter videos!

Under Section 107 of the Copyright Act 1976, allowance is made for “fair use” for purposes such as criticism, comment, news reporting, teaching, scholarship, and research. Fair use is a use permitted by copyright statute that might otherwise be infringing. Non-profit, educational or personal use tips the balance in favor of fair use.