Today, few time ago a another video titled RESERVE YOUR USERNAME IN WIZARDS UNITE (UPDATE)!!! was posted in the channel: The Wizards’ Guide 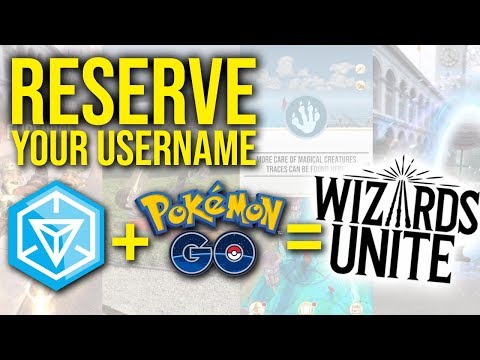 As informed in the video page by The Wizards’ Guide: Quick update here, as it is late and everyone else in the house is asleep! We are getting EVER so close to Wizards Unite becoming a reality…and tonight is another step in that direction.

Pokemon Go and Ingress players received an email from Niantic encouraging them to reserver their Traininer or Agent names in their respective games as their CODE NAME in #WIZARDSUNITE!!!

So make sure you go in and SNAG your Code Name on the SoS Task Force, ASAP! I’ve already seen several people on social media saying their desired name was already taken…so make sure you are vigilant!

What does this mean for the release date? Does it mean anything? Honestly, I’m starting to think that your guess is as good as mine. The facts we know:
– Google Play’s Pre-registration has been open since March 11. There is a 90 day window where the game “has” to launch before being cancelled. We’ve learned that this window can be extended by larger developers, if needed

-STILL NO iOS Pre-registration as of this recording (April 9)
iOS tends to have a more strict window to follow and tends to obide by the 90-day rule…After 90 days, the app is a NO GO in the app store. I think it will appear in the app store a couple weeks before beta and about 2 months before release…it doesn’t HAVE to be in the store for 90 days…that is just the limit

– Users can reserve their Code Name in Wizards Unite until April 30
So the game definitely, most definitely, will not be released before the end of this month…if anyone was still thinking that.

– Niantic has announced a pretty busy schedule with both Pokemon Go and Ingress events…it will be tough to coordinate a game launch BUT, it looks like the best possible window could be the last week of June…Let’s hope so, that way the Wizards Guide family can play a bit before the baby arrives!

That’s all for now, GO GET YOUR USERNAME IN WIZARDS UNITE NOW! Like…for real, go! Get ready for the hype train, y’all!

We will keep following the channel and posting everything we find